In November 2015, after a normal full-term pregnancy, I gave birth to our first child. We named him George after his grandfather and great-grandfather.

At first, everything seemed fine, but when 48 hours passed without a bowel movement, the doctors were uneasy. George began vomiting, and surgery was scheduled, during which a biopsy confirmed a diagnosis of Hirschsprungs Disease. An ileostomy was performed.

The first 24 hours after surgery were physically and emotionally exhausting for his father and me.  We were in shock. Nothing had prepared us for this! The first pouch change seemed like an out-of-body experience. I had never seen anything like that, and the fact that it was happening to my precious new baby made it surreal. I remember thinking, “This is not really happening. I can’t do this.”

But that was our reality, and within a few pouch changes, acceptance began to settle in. We were in the hospital for five weeks and learned to face everything as a team. George was on intravenous feeding and we had to measure his output. At the five-week mark, he had gained a pound, and we were finally able to take him home.

Every expectant parent dreams of bringing home a perfect, happy, healthy baby. But within two days of his birth, our beautiful new son was clearly not healthy.

Things were more relaxed at home; no more round-the-clock visits from nurses or a precise schedule to keep, and life began to look brighter. We established our own routine and got into a rhythm. To George, having an ostomy was normal; it was his father and me who faced the challenges of adjusting to this new life.

That was nearly a year ago, and with the possibility of a reversal in the near future, it’s almost hard to imagine life without the ostomy.  It will be weird to see a diaper. And I suspect that changing an ostomy pouch is easier than changing a diaper blowout, but we’ll see.

Reversal or not, George is a wonderfully happy baby. He’s laid back, sweet and loves to smile. He’s flirty and fun. And when a camera comes out, he’s quite a ham.

When people meet George for the first time, they’re surprised to find out that he has an ostomy. We do any activity we want to do; the ostomy hasn’t changed our lives. In short, George is the picture of a happy, healthy baby … which was our dream all along.

In short, George is the picture of a happy, healthy baby … which was our dream all along. 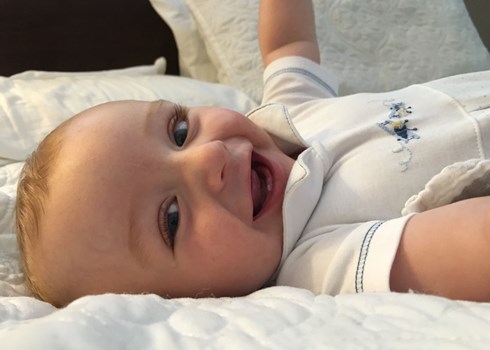